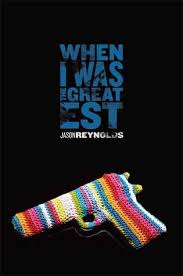 Ali, who lives in Bed-Stuy, Brooklyn, with his mother, Doris, and sister, Jazz, is an amateur boxer and pretty good kid considering his circumstances. He often takes care of Jazz while his mother is at work, and he befriends the brothers next door, Needles and Noodles. Noodles always seems to be looking for trouble – stealing, fighting, skipping school – but Noodles, who has Tourettes Syndrome, just wants to knit with the needles that Doris gave to him to help him focus and control his symptoms. Ali struggles with doubts about his boxing abilities, and Noodles and Needles deal with absent parents and where their next meal will come from, but otherwise they run wild in their neighborhood, causing pretty low-stakes trouble. That is until their friend Tasha invites the boys to an adult party, with alcohol and everything, and even Noodles couldn’t have expected the trouble they get into.

Urban fiction is a genre that I don’t think gets nearly enough love. In my work as an outreach librarian in Boston, I work with a lot of Black and Hispanic teens, particularly in Boston’s juvenile detention centers, who want to see themselves, their neighborhoods (or one similar to them), and their problems reflected in the books they read. Critical acclaim and writing comes secondary to the story, the setting, and their ability to relate to the characters. When I Was the Greatest, with its strong first-person narrative, realistic setting complete with tenement apartments, absentee parents, bodegas, and gangs, provides the best of both worlds. Also, Noodles, Needles and Ali get into trouble but not that much trouble, making this a great introduction to urban fiction for younger YA readers and uninitiated adults alike.

Read alikes and other good urban fiction for teens:

One thought on “NaNoReadMo: When I Was the Greatest”