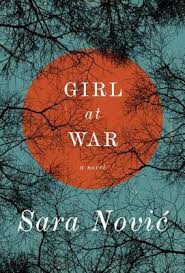 As a young girl, Ana suffers some very traumatic experiences during the War for Independence in her home country of Croatia, which was still part of Yugoslavia at the time. She comes to live and study in New York City where she has a boyfriend, an adopted family that loves her, and a role presenting to the UN about her experiences as a child of war. Her past is told through flashbacks and the story comes full circle when she returns to Croatia as a young woman to face a past that others tell her she ought to move on from but can’t let go of (she still wakes up screaming from nightmares). In Croatia, she seeks out friends she thought might be dead and revisits places that bring her joy and heartbreak, both through her memories and through the new experiences that bring at least a possibility of closure. Girl at War has an abrupt ending that has the potential to piss off a lot of readers with its open-endedness.

How much do you know about the Croatian War of Independence? Before this book I knew almost nothing. Now, after some Wikipedia and Brittanica browsing, I know slightly more but still probably less than such an event deserves. A few scenes from Girl at War have been haunting me for the last week or so because facing what humans do to each other in war is something I never get used to and hopefully never will. You might want to keep some tissues near by as you read this one.